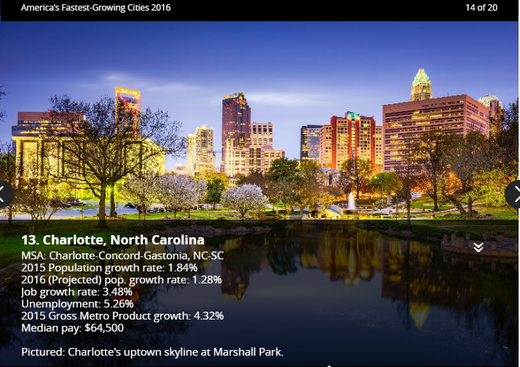 Source: Forbes.com
There is a general feeling that Charlotte is losing large amounts of tree canopy as a result of the city's rapid growth and associated land development. The city recently ranked 13 out of 20 on Forbes magazine's list of "America's fastest-growing cities" for 2016, based on measurements of fastest-growing populations and economies. With this high rate of growth comes high levels of development, which are often associated with loss of trees and tree canopy.

Charlotte is ahead of many cities by having a tree protection ordinance in place. This ordinance contains mechanisms and requirements for the preservation of tree canopy during development. The question is: how effective is this ordinance? What impact does it have, or will it have, on meeting the city's canopy goal. There is a sense that canopy losses are substantial, (see What's at Risk), and that the rate of canopy loss needs to be slowed via a stricter ordinance with higher preservation requirements. However, solid data will be required to realistically make the needed protection policy changes in Charlotte. To do that, an updated tree canopy assessment (UTC) study (one that includes significant change analyses) is required.

However, before hiring experts to undertake a UTC, thoughtful consideration should be taken to ensure the study produces the findings that will support the city in making future decisions to adjust policy. Important questions to answer may include:
These questions will help answer the ultimate question: How impactful is the existing tree protection policy? What should be adjusted in the policy? While it is important to consider how other cities approach their tree protection policies, Charlotte's primary focus should be its own policy and whether that policy helps the city reach its goals (in this case, 50% by 2050).

Further relationship building between the development community, the City of Charlotte, and TreesCharlotte will also be greatly improved through implementation of further study. The Charlotte Homebuilders Association recently passed a resolution to form a subcommittee on this topic, which can open the door for discussions. This group should be included in the assessment process.
Next Steps:​
​Potential Owner:  Tree Canopy Manager (City), Development working group (Canopy Team)
Potential Participants:  City Staff, REBIC, Charlotte Homebuilders Association, Davey